Combination of ethnography and grounded theory: a method for research in urban studies

In research conducted on the city and issues related to space and place in urban planning, it can be helpful to use both ethnography and grounded theory methods depending on the researcher’s purpose. However, the weaknesses of each of these methods lead to a number of gaps. The method of ethnography is highly useful for in-depth research and understanding of culture, but it suffers from the lack of a coherent analysis stage, and does not necessarily lead the researcher to the appropriate theory. Meanwhile, its open-ended nature fails to meet urban researchers’ expected outputs. On the other hand, one of the most important factors that justify the method of grounded theory is the lack of theories appropriate to the context under study. This method offers a coherent, systematic analysis, and the clear output is to arrive at the theory. The sociological origins of its proponents suggest that in the frequent applications of this method in academic research, individuals and the relevant social and psychological issues have often mattered rather than spaces. Moreover, the extensive use of the current systematic version has increased the possibility of converting the method to a mechanical one and reduced its depth. Therefore, the purpose of this study is to adopt a method involving a combination of the above two (ethnography and grounded theory) so that they can fill each other’s gaps and provide a suitable, efficient framework for conducting studies in the field of urban studies.

Among all methods of qualitative studies, ethnography is one that reveals many details (Stevenson, 2003). The term ethnography is rooted in cultural anthropology. Ethno- means people or ethnicity, and -graphy means to describe something. The American anthropologist Clifford Geertz believes that a very important part of ethnography is a complete, accurate description (Neuman, 2015, Volume II: 278-279). Ethnography facilitates broader research on individuals in different communities, both at the city or a smaller scale. As a qualitative research method, it considers the story told by the participants (Pardo & Prato, 2018: 389). Ethnographic research ends in a summary of how a group functions in everyday life, and the reader thus gains an understanding of a group with which he/she is unfamiliar (Creswell & Poth, 2018: 271). Grounded theory, on the other hand, was developed in 1967 by two sociologists, Barney Glaser and Anselm Strauss. As a low-level or middle-range theory, it emerges from a particular position, and is a competitor for grand theories (Glaser & Strauss, 1967: 34-35). Moreover, it is a tool that can prepare the researcher in the field of urban studies to develop relevant theories (Allen & Davey, 2017: 1).

Scholars such as Kathy Charmaz welcome entry into a methodological conflict and call other researchers to the field (Charmaz, 2006). The purpose of this research is to design a hybrid of the two methods of ethnography and grounded theory to help to fill their gaps as a suitable, efficient tool for conducting research in the field of urban studies. This has been carried out through a systematic review of each of the two approaches and study of the methods of their combination. Finally, the grounded theory ethnography has been tested on a sample café in the center of Tehran.

In this research, various combinations of ethnography and grounded theory have been studied and classified into three categories. The first involves studies that consider one of these two methods as a subset of the other or as superior to and more complete than the other. The second group emphasizes the importance of ethnography and achievement of the constructivist grounded theory, where Kathy Charmaz is the leading figure. The third category emphasizes the simultaneous use and combination of the two methods, where ethnography is used for data collection, and grounded theory is used for analysis. In this study, a combination of the second and third approaches has been adopted. Grounded theory ethnography can be defined as a method that utilizes both approaches, and proceeds with the stages of cognition and analysis simultaneously according to both methods. The final product is a theory derived from the constructivist approach and supported by ethnographic cotextuality. The method consists of four steps: 1. initiation of the fieldwork, 2. data collection (involving observation, interview, photography, sketching, and maps), 3. analysis (involving coding and memo writing), and 4. achievement of the theory and documentation.

This study has demonstrated that grounded theory ethnography is a method that can cover the drawbacks of both methods of ethnography and grounded theory, and can be used in conditions where both methods are required. This is the case where the issue of understanding the culture of the examined context is one of the researcher’s main concerns. Moreover, there has been no specific theory to introduce the phenomenon under study, turning it into an important aim of the research to achieve such a theory. The above hybrid approach is highly applicable particularly in the field of urban studies because of the efficiency of investigation of the city and urban space in ethnography due to the emphasis on entry into the field of research and the relevant strategies and on the observation involved in the method. However, the method suffers drawbacks including the lack of a clear analytical stage and open-endedness, which can be covered by grounded theory. Using grounded theory ethnography and going through its four stages, the researcher can conduct in-depth studies according to the cultural context of the field.

Acknowledgment
This research has been extracted from the Ph.D. thesis of Maryam Farash Khiabani, entitled Unraveling the essence of other spaces of the city of Tehran (central district) with emphasis on cultural context, defended in the Department of Urban Planning at the University of Art under the supervision of Dr. Parvin Partovi. 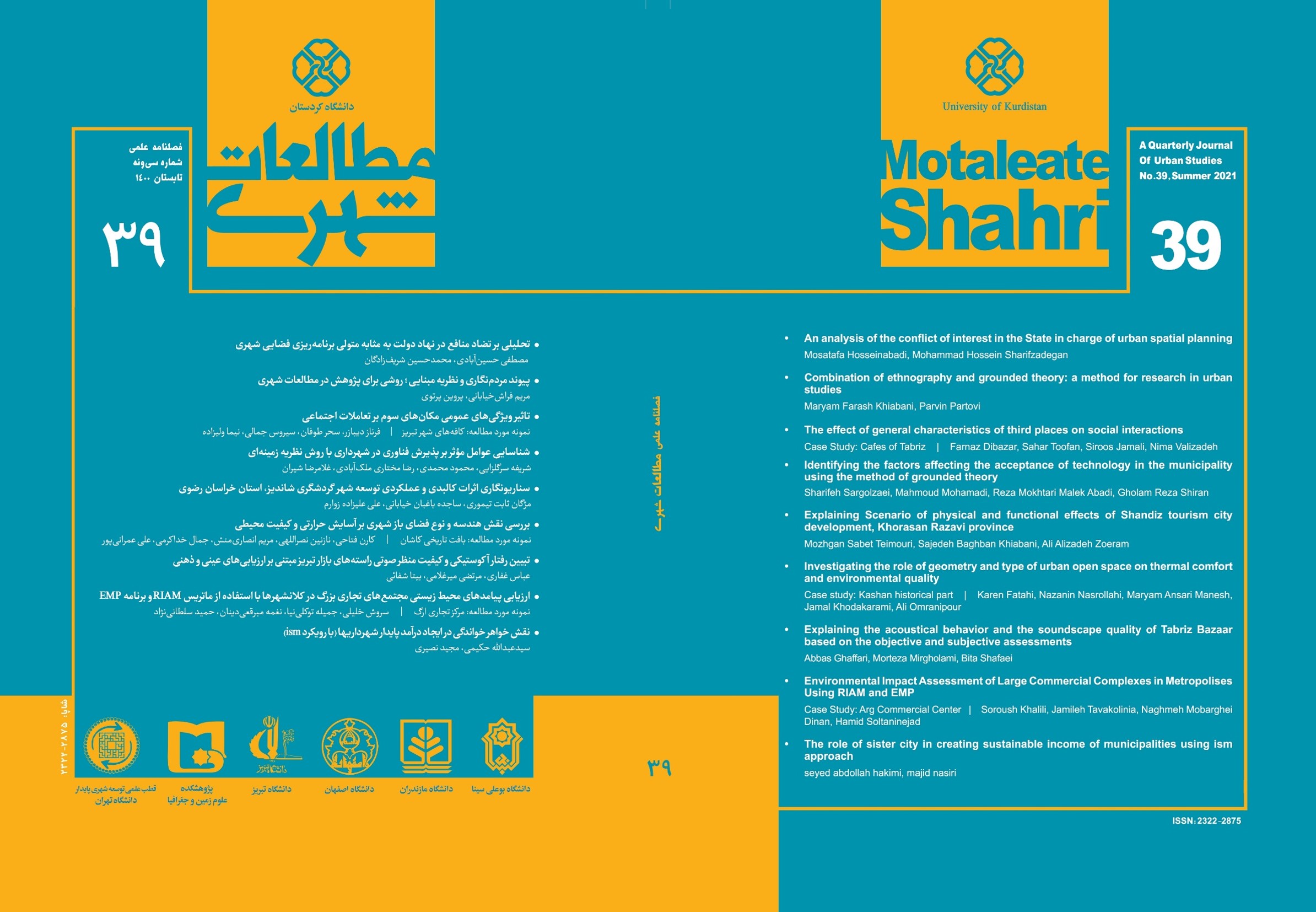